Written by Admin  Posted on September 05, 2019 Hmmm... Dione has grown cross with me again, simply because I wasn't showing any interest in any of Hope's Prism outfits. Bah. All this fishy "fabric" nonsense is uninteresting compared to traditional Merfolk presentations. Aside from important ceremonial garments, we decorate ourselves with elements of the natural environment… or we use magic to emulate the creatures around us, such as the Kith.

For example, those brave enough to swim into the rocky tide pools would imitate the hard shell of a Red Baubleacean Shell and layered Red Baubleacean Tail to protect themselves against the tides of the Everstorm, or use snapping Red Baubleacean Claws to fend off their foes. Hhehh... I remember being a newly-hatched youth myself, clinging to the rocks and watching a merman with a flashy Red Baubleacean Stache. Made me determined to have some whiskers of my own, one day.

On the other hand, those with a nose for fascinating treasure delved among the sunken ships with a Blue Whimperial Tail. All those Blue Whimperial Spots served as good camouflage, too. But folk said that if you became too fixated on your treasures, your view of the world would become distorted, as though viewed through the walls of a Blue Whimperial Bubble, or through eyes full of Blue Whimperial Tears. Hhheh. Superstitious babble, of course.

You see? Much better than wearing any of those absurd "shirts" that Dione is always fussing over. Anyway, when that scientist lad was diving here over the summer, he mentioned that his father found these sorts of things interesting, so I suppose you could head to the Headmaster's Office to buy a few of these modifications yourself.

But an old merman's got to keep a few of his secrets, hhehhh. So if you want to complete your trash piles, you'll need to swim all the way down to the Seabed to talk to me...
Go to Forum 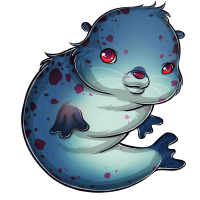